Experience the wonder of the magnificent Dalmatian Coast in style on this classic Round Trip cruise departing from Split. Discover Croatia's highlights in style and comfort on board a Deluxe vessel. Explore picturesque harbours and villages, witness remarkable history and marvel at the natural beauty of Croatia on a trip you'll be sure to remember!

DAY 1 Split
Welcome to Split - the largest city in the Dalmatia region. Embarkation commences at 14:00hrs. Enjoy your afternoon exploring the city before meeting your Cruise Director and crew over a welcome drink and a snack. Dinner will be served on board to mark the start of your Dalmatian adventure! D

DAY 2 Split - Hvar - Vela Luka
After breakfast use the free time to explore Split on your own or join the optional walking tour with a local guide. Learn about the history of this former Roman empire and be shown around the spectacular Diocletian Palace which dates back to the turn of the fourth century. Later in the day set off towards Hvar, said to be the sunniest island in the Adriatic and well known for its boundless fields of lavender and ancient olive groves. Upon arrival in Hvar you will have the opportunity to join the optional guided walking tour or to freely explore the lovely historical town and its coast. Next, cruise to Korcula island for your overnight port. Stop for a spot of swimming along the way at the delightful neighbouring Pakleni islands. You’ll reach Vela Lula (Korcula Island) in the late afternoon and this evening, feast on a delectable Captain's dinner aboard the ship. BD

DAY 3 Vela Luka - Mljet - Slano
Start the day with a swim stop in one of the hidden coves along the coast of Korcula. Arrive in Pomena, a small village located on the western end of Mljet island and gateway into the Mljet National Park. This lush national park is home to two saltwater lakes connected at the sea via a narrow canal. You can either join a guided tour or choose to explore the park on your own. In the late afternoon depart for Slano, a picturesque town situated in a peaceful bay dotted with pebbled beaches, olive groves and many historic monuments. Overnight in Slano. BL

DAY 4 Slano - Dubrovnik
This morning you will have free time to explore the quaint little village of Ston. Famous for its 5km long city walls, local wines and seafood, why not join the optional guided tour, ‘Taste of Dalmatia’, which highlights these prides of the region. After, set off for the ancient city of Dubrovnik and enjoy a short swim stop along the way at Lopud island. Surrounded by impressive city walls, Dubrovnik's Old Town is brimming with beautiful architectural buildings that combine Gothic, Renaissance and Baroque style in unique harmony. Embark on an optional city tour or explore the city at your own pace. Its medieval city centre and main street, the Stradun, houses numerous cafes, bars and shops to watch the world go by. The evening is free for you to experience the local cuisine at one of the many restaurants nearby. BL

DAY 5 Dubrovnik/ Excursion to Montenegro
Venture east across the boarder to the neighbouring country of Montenegro! Located less than an hour’s drive from Dubrovnik, Montenegro offers an unforgettable experience rich in history, culture and natural beauty. Discover picturesque Perast with its quaint seafront and Our Lady of the Rocks Church, poised on a manmade island. You will also visit the UNESCO listed treasure, the coastal city of Kotor. Hemmed in by the staunch walls snaking up the surrounding slopes, the town is a medieval maze of museums, churches, cafe-strewn squares and Venetian palaces and pillories. Wander around the town at your leisure before heading back to Croatia where you will overnight in Dubrovnik. Dinner will be included on board. BD

DAY 6 Dubrovnik - Elaphite Islands - Korcula
Cruise to Korcula with a stop at one of the beautiful Elaphite islands for a relaxing stroll and swim. The Elaphite archipelago is alluring for its pristine islands which were once an oasis for local seamen to build their ships and for captains to build their estates. Today the Elaphites are praised for their quaint ambiance and provide a refuge away from the hustle and bustle of the larger neighbouring islands. Lunch will be served on board before a scheduled afternoon arrival in Korcula where you will spend the night. Recognised as being the alleged birthplace of famed traveller Marco Polo, the island of Korcula has an interesting history and was once under the reign of the Venetian Republic. This is evident through the many lion statues and emblems seen throughout Korcula town. On arrival you may choose to join an optional guided walk to see for yourself why this enchanting place is considered one of the best preserved medieval cities in the Mediterranean. BL

DAY 7 Korcula - Brac - Omis
After breakfast this morning cruise to Pucisca, located on the north side of Brac island. On the way, there will be an opportunity to anchor for a refreshing swim in a secluded bay. Upon arrival in Pucisca you will have the option to explore the area on your own or to join a tour to the Stonemasonry School. Here you can learn about the famous Brac limestone and their centuries-old tradition of stonemasonry and the unconventional tools used. The precious limestone from this region have been used to decorate the facade of the White House in Washington DC, the Budapest Parliament Building and many other landmarks all over the world. Continue on to Omis, where you will find a small town built below steep mountains at the mouth of the Cetina River. Perhaps take an optional boat excursion exploring the Cetina River Canyon. The rest of your evening is spent at leisure in Omis where you will overnight. BL

DAY 8 Omis - Split
Depart for Split early this morning and enjoy a farewell breakfast on board before saying goodbye to your fellow travellers and crew. Disembark in Split at approximately 9:00hrs. B 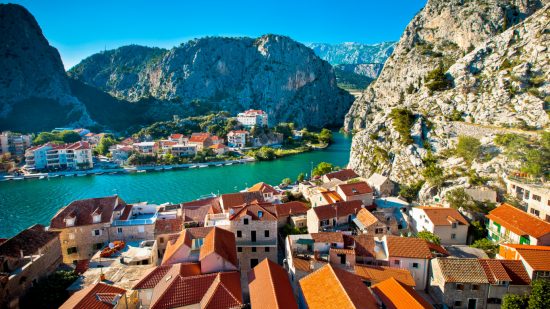 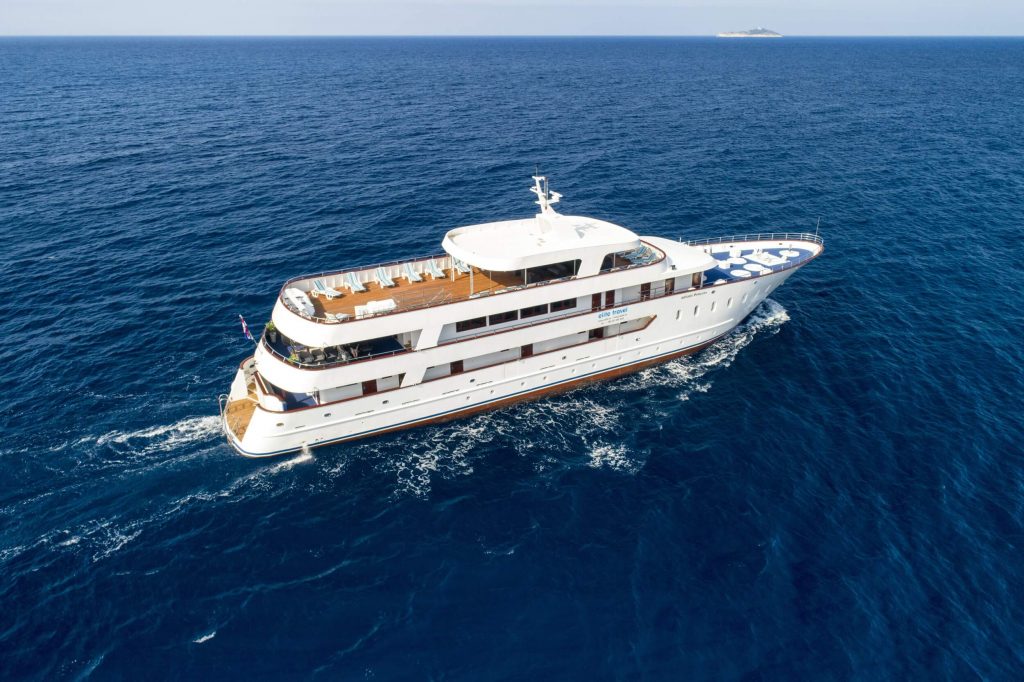 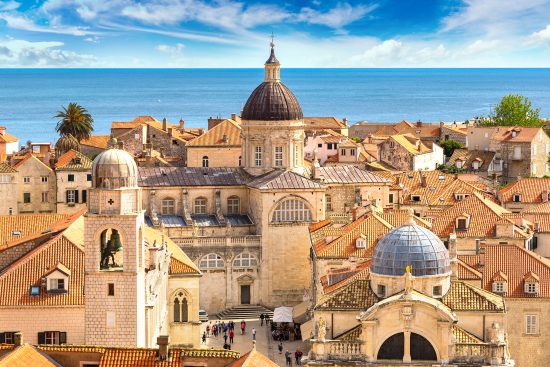 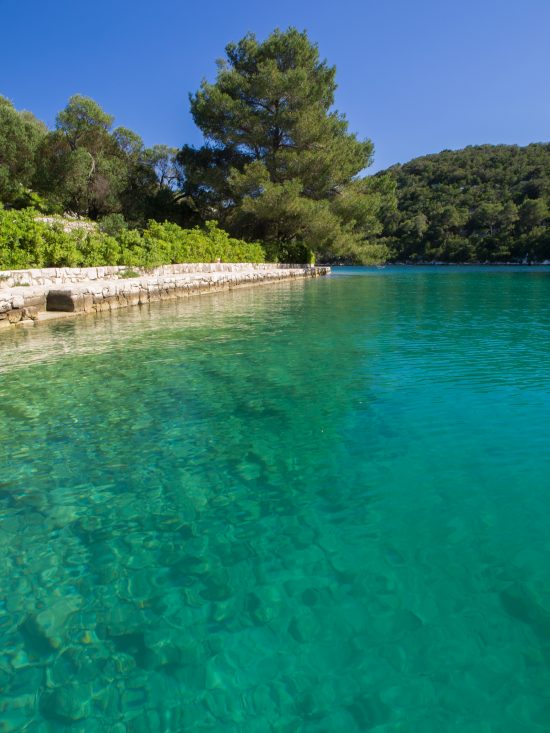 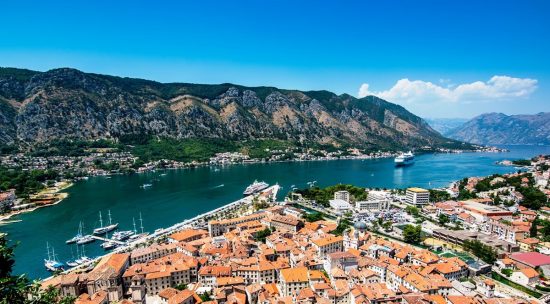 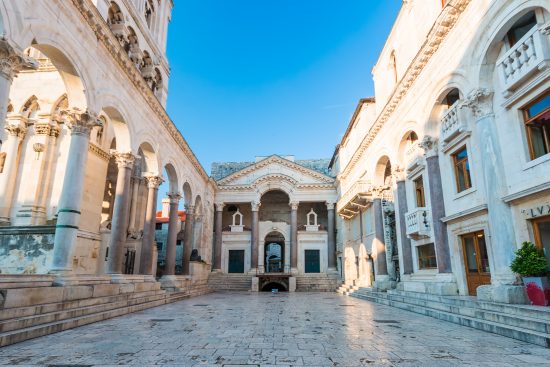 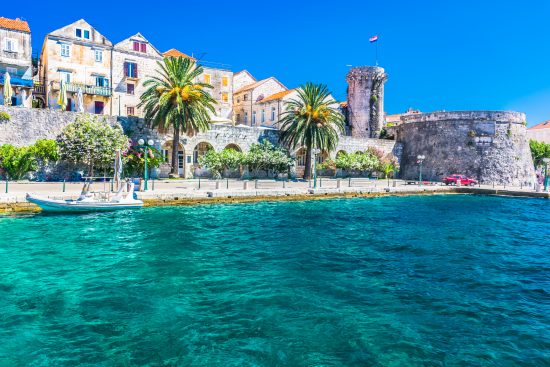 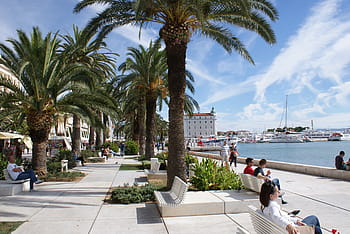 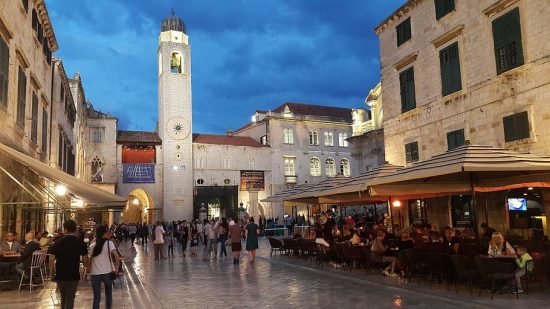 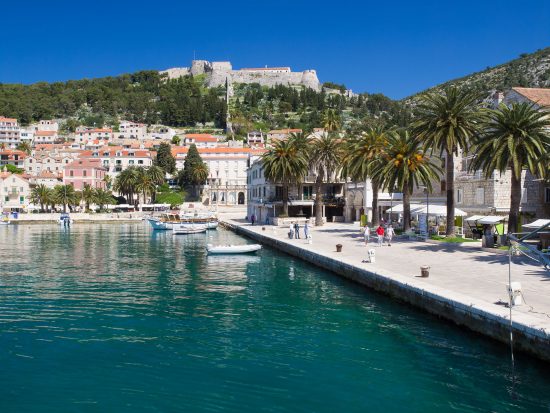 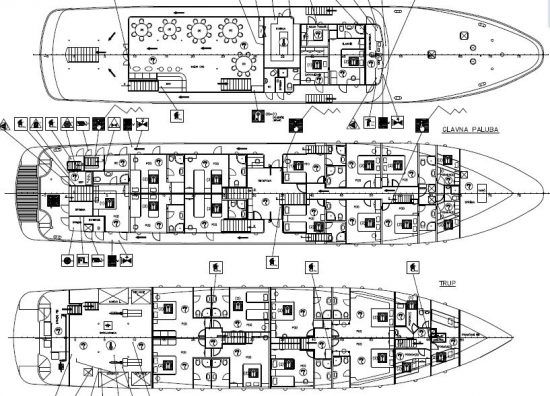 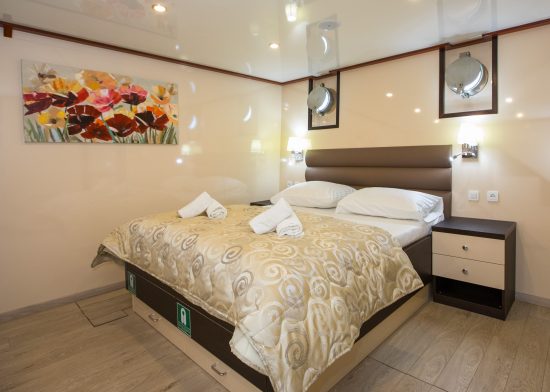 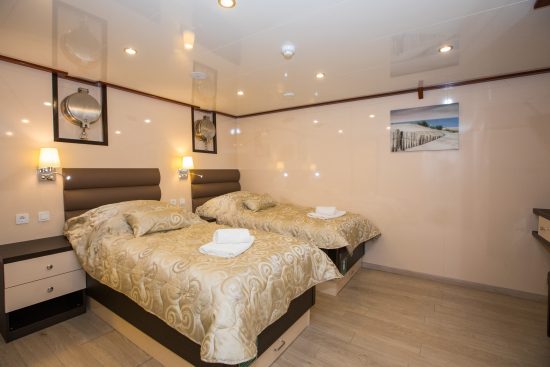 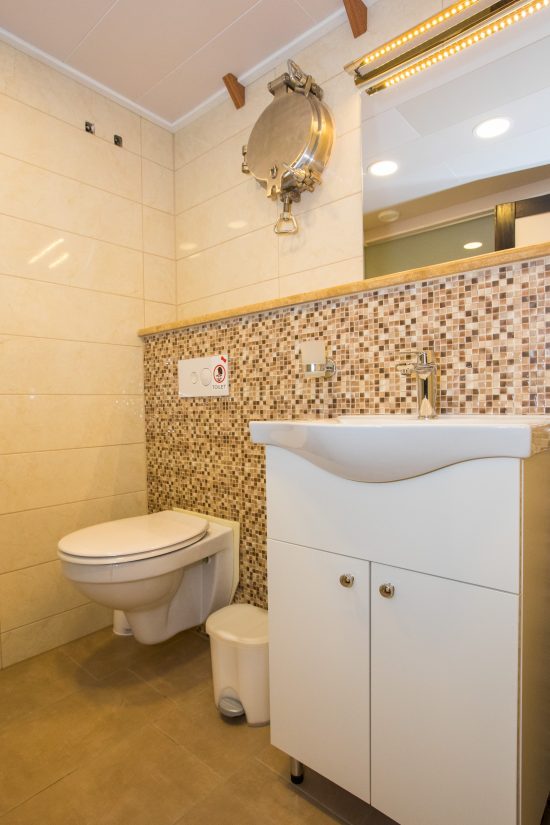 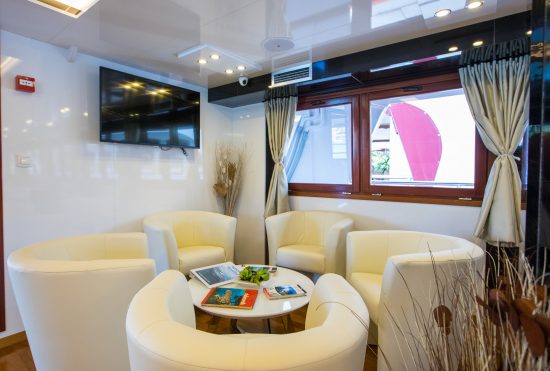 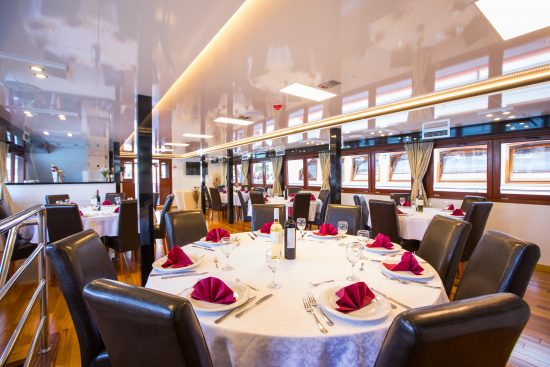 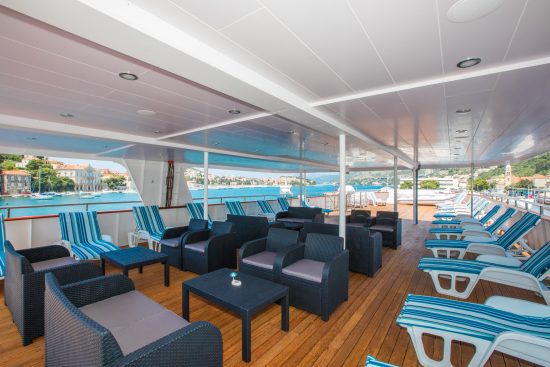 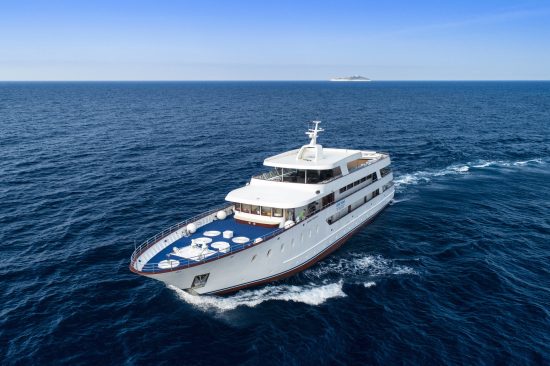 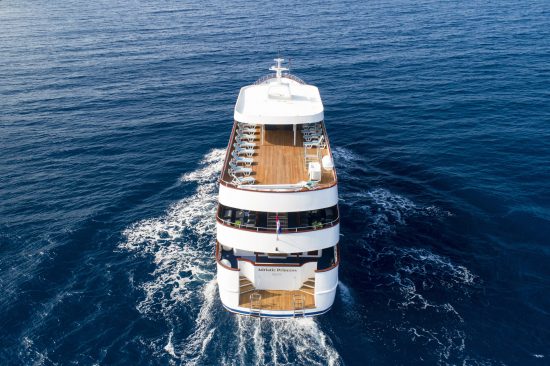 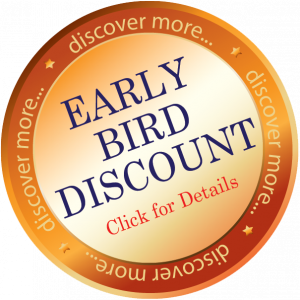 Prices shown below are inclusive of any and all applicable discounts.